Letters from Dachau: A father’s witness of war, a daughter’s dream of peace 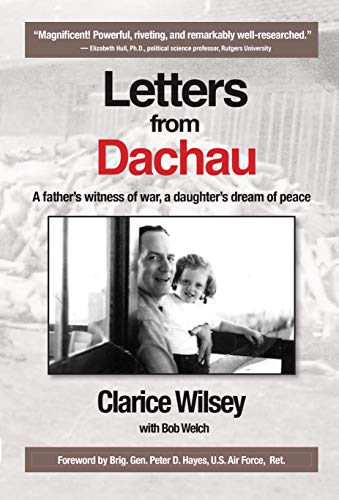 A heartfelt memoir written by the daughter of a U.S. physician who, in World War II, was among the first doctors to provide medical care for the liberated survivors at the Dachau Concentration Camp in Germany. Dr. David Wilsey was a brilliant anesthetist—a member of the Alpha Omega Alpha honorary medical society—who, in October 1944, left his wife, Emily, and infant son, "Thumper," to serve in France with the 116th Evacuation Hospital. While serving there, and in Germany, Wilsey wrote more than 300 letters to his wife, documenting his often-horrific experiences, which, in Dachau, included patients who’d been tortured and starved by the Nazis. One letter said, "War & Dachau change lots of things that you will have to just see for yourself.” His prophesy proved true; after his return home, Wilsey was never the same. In a heartfelt memoir told through the eyes of a daughter, Clarice Wilsey writes of Dachau, war, and the heroic man she never knew. It is a story of heroism in the face of cruelty and how the wounds of experiencing such sometimes never heal. Writes Dee Simon, executive director of the Holocaust Center for Humanity in Seattle: "Wilsey shares with startling openness the deepest thoughts of a man plunged into one of the world’s most horrific crimes. She reflects on this crucial history as a daughter raised in the shadow of trauma.”